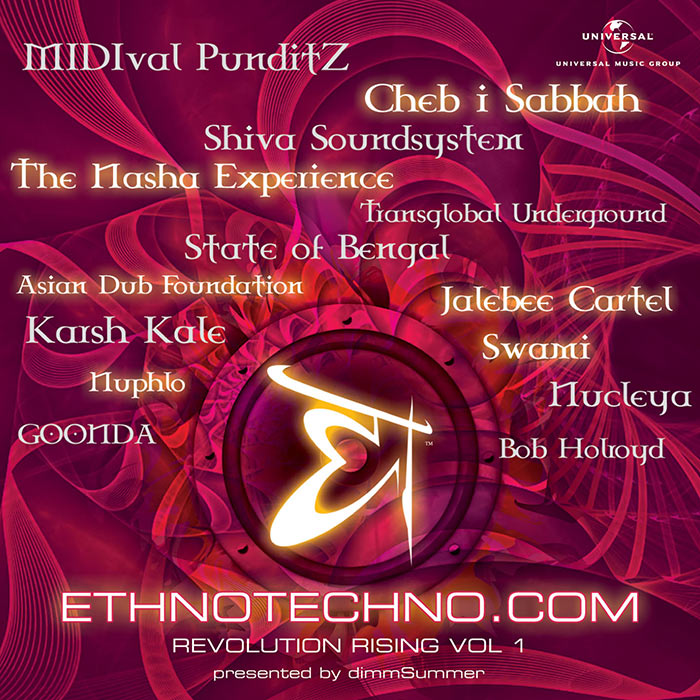 When the background score to a Bollywood hit film is composed by underground dance music icons Midival Punditz and Karsh Kale, you know somethingâ€™s brewing in the realm of Indian left-field electronica. While electronic music split open international consciousness with the Goa trance scene, it evolved with the Punditz and Kale on the Karthik Calling Karthik soundtrack. Today we have arrived at what is perhaps the finest collection of electronic dance music to hit the Indian nation, Revolution Rising: ethnotechno.com vol. 1 (Universal Music India).

This is certainly not trance, however. New York City-based producer dimmSummer has been involved in this scene for over a decade, as both visionary graphic and web designer, as well as with his innovative radio station, EthnoTechno.com, which can be considered a blueprint for this sixteen-track compilation. The movement that he helped front is poised to move above ground in the subcontinent’s musical mindset, and with this album, we are one step closer to the future of music in India.

Building from his personal relationship with all the artists on Revolution Rising (originally released on High Chai Recordings), dimmSummer handpicked a number of exclusive tracks from this impressive roster of talent. Given the broad reach of his website, and the devoted fans it has acquired, nobody else could have possibly assembled such an album. It quickly gets to the throbbing heart of the underground dance scene, presenting a thick exploration of dubstep, chillout, D&B, and thriving electro.

Of course, Midival Punditz appear with the inspired â€œTonic,â€ and NYC crew Goonda rocks a heavy beat on a RiddemKillah remix of their song, â€œFearless,â€ featuring MC Zulu on vocals. Nucleya, a former partner in Bandish Projekt, reinvents the RD Burman classic, Mehbooba. Finishing in fine form, dimmSummer himself has his hypnotizing way with Bob Holroydâ€™s operatic â€œLight Water.â€

Bollywood has long dominated the music scene in mainstream India. Today people are realizing there is a world more out there, and it seems an opportune time for this groundbreaking electronica to slide into the mix. Industry giant Universal Music India’s optioning of Revolution Rising is a necessary first step in this bold new sonic world, one that will certainly help define the next decade and beyond in India.